The Greek roots of the word photography translate as "writing with light." Welcome to my studio--a place to practice and illuminate good work using writing and photography. 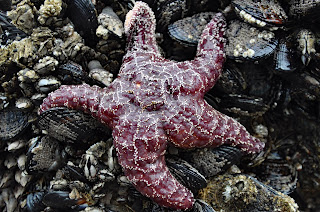 . . . or does this starfish have the cutest bum?

Rebirth in the Columbia River Gorge

This is for those of us whose hearts were broken on the morning of September 3, 2017 when we received word that our beloved Columbia River Gorge was on fire, and the wind was unlikely to let up anytime soon in the basalt-sided, river-filled canyon separating Washington from Oregon. The fire, we learned, was set by a 15 year-old with fireworks, making it feel all the more tragic. Known as the Eagle Creek fire, it burned just under 50,000 acres in the 3 months it took to extinguish it, at a cost of $19 million. So much loss.

The Columbia River Gorge was the place our family traveled on those long-ago-forgotten Sunday drives. Avoiding Interstate 84, we would cruise along the Model-T-size road on the old highway in the 57 Chevy, wishing my aunt would drive so we didn't have to endure my uncle's nauseating acceleration/deceleration driving style. The Columbia River Gorge was where Portlanders cruised to blow off steam, or a sure trip with visiting friends and relatives. My Mom acted as if the Gorge highway was put there primarily for her pleasure, back in the days before Rooster Rock became a clothing optional beach.

I couldn't bear to see the fire's devastation, so I stayed away . . . until a couple of weeks ago.  A friend and I hiked from Multnomah Falls to Wahkeena Falls. As if by magic, the forest is alive, the flowers are blooming, and the landscape is ironically made more vibrant by the contrast of charred bark and living color. 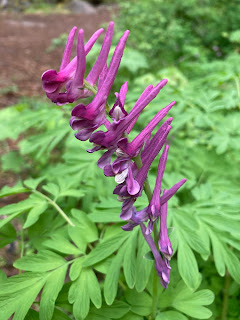 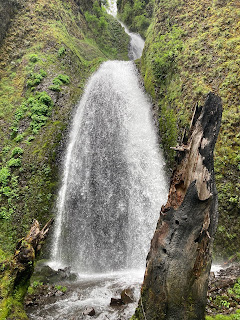 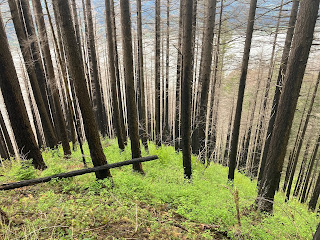 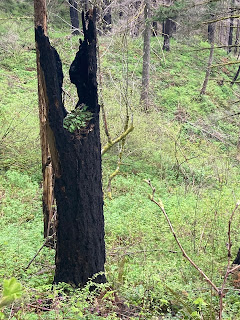 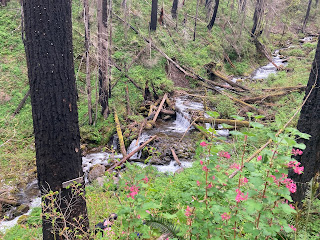 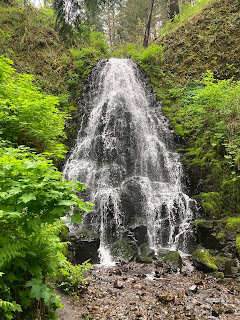 Even the fairies at Fairy Falls tidied up for our visit.
Posted by Tonia at 3:08 PM 2 comments: 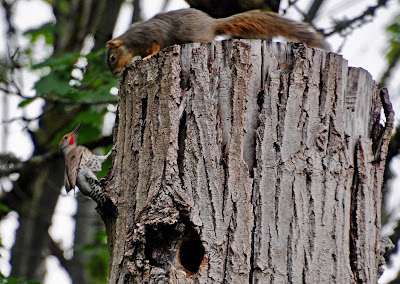 As it turns out, the first flicker nest site was a decoy. It is left abandoned, minus the comings and goings of curious starlings looking for real estate. Further up the tree, however, flickers found another cozy nest site they are spending their days pounding and scraping clean. This morning squirrel investigated. Flicker objected, then escaped to a nearby maple tree.
Posted by Tonia at 10:14 AM 1 comment: 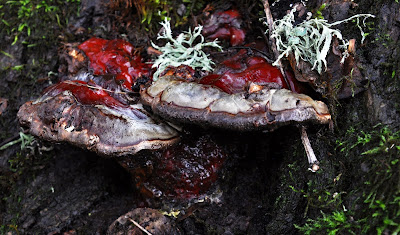 On an overcast fall day nestled near the ground, in a small cup of decaying matter, Reishi presents. At first I'm not even sure it's a thing, instead a tangled glob of forest floor. The closer I get, the more muppet-like it appears. I hesitate a moment with a tiny shiver before I am near, sense it is alive, and capable of moving. It doesn't. I am rapt, shoot like it's going to disappear.
Come to find out, all Reishi species grow on trees that are dead or dying. The mushrooms will continue growing every year until the wood has completely rotted away. You can come back to harvest them again and again, which is why I didn't identify for you the location of this mushroom.

And, early research suggests Reishi likely has anti-inflammatory, antiviral, antibacterial, antioxidant and pain-relieving properties. They are good for beginners because no other mushroom looks like them. Considering their bitter taste and woody characteristic, they are considered best used in powder form, though diehards insist you just have to cook them right. The National Audubon Society was founded in 1905 to protect birds that were hunted for their feathers--a noble cause at a time when many species were taken to the brink of extinction by the demand for ladies be-feathered hats--a sign of status at the time. The Great egret is the symbol for the Audubon, a fitting bird whose aigrettes, used in courtship displays, were plumage coveted by milliners.
Posted by Tonia at 5:17 PM No comments: 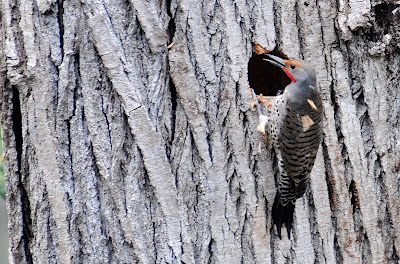 . . . you will miss a flicker chipping and hauling wood from an already weakened tree to make its nest. Like the entrances of woodpecker relatives, its hole will be perfectly round and filled, one per day, with 5-8 eggs (twice between February and July). Once their eggs are laid, the parents never leave them unattended, assuring starlings and squirrels can't take over the nest. Next season another bird family will move into flicker's nest, while flicker burrows a new hole.
Posted by Tonia at 4:04 PM 1 comment: 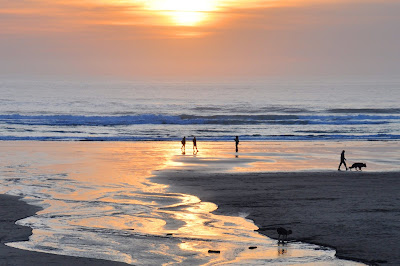 For those who've been led to believe it only rains at the Oregon Coast.
Posted by Tonia at 6:44 PM 1 comment:

Visit my other hangouts